Haven't posted in so long!

It has been a whole year!

I have been making chainmail so much that my stitchy bug has disappeared. I haven't been stitching anything lately, so I don't think about writing posts here anymore.

I do have my own website, that does have a blog section that I have posted a few things on, but I still don't post there very often, either. I need to get back in the habit.

I recently had an artist alley booth at the Dallas Fan Expo. This is the biggest event I have ever had a booth in, and it was a lot of fun. Whilst I didn't make as much money as I was hoping, I did learn a lot and I hope to attend again in the future!

The artist booths there were so cramped! They had 3 tables in a row with 0 space between, and you can only get out on one end. Of course, I was all the way on the inside, so I had to crawl over my neighbors whenever I needed to go to the bathroom, etc.
I did get lucky, though. One of the artists in the row-of-three had Large items, so they were able to get moved to a more appropriate location. Since we had an empty spot, my neighbor and I both took half of their space and were able to spread out. It was so great! We weren't quite as squished, and we were able to put out more items for sale.

I did sell a lot of chainmail! Since that event, I have been making a ton more things to greatly increase my inventory. I made about 70 stretchy bracelets and a few dice bags so far. I have plans for quite a few more items in different color combinations!

Here is my cramped booth before we were able to spread out (and I was able to rearrange some things, too). I was able to put up a LOT more necklaces, and removed the straws. My payment banner was fully visible once we spread out. 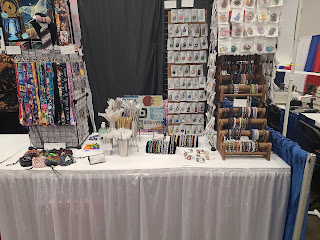 No recent posts... but for good reason!

I know I haven't had a recent post here, lately, but there is a good reason for this. My cellphone suddenly just decided not to power on any more. I tried everything and even took it to a store, but it couldn't be saved. I had some pictures already taken of some bookmarks, but I couldn't post about them because the pictures were on the SD card!

I borrowed a phone for about a month, but it didn't have an SD card slot, so I just had to wait to get to my pictures. I was finally able to get a new phone, so I am back in business.

So, first, I want to show the picture of the bookmarks I was hinting at with my last post. Those were charms from Avatar: The Last Airbender! From left to right: water, fire, air, earth. 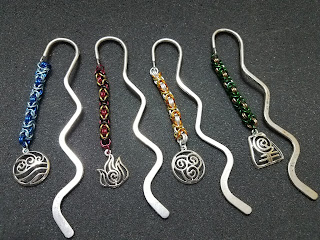 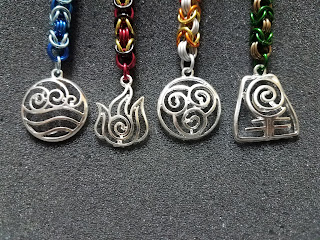 Next, here are some individual ones I have made, too. 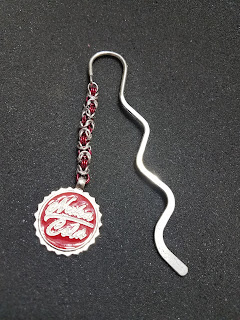 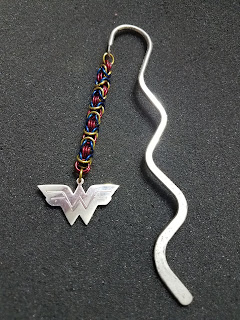 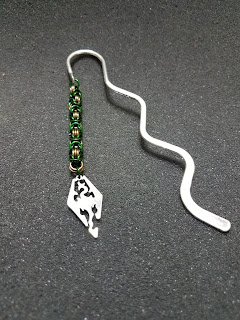 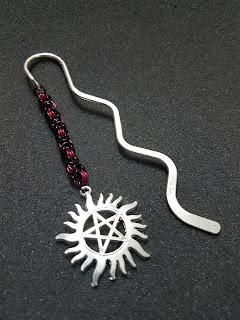 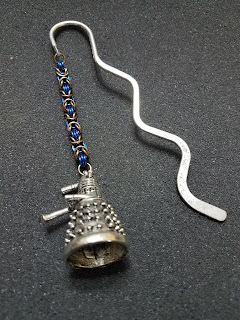 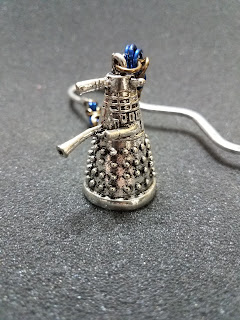 I have a few more made, just don't have any pictures of them, yet.

Hello everyone! I haven't been posting much lately because I haven't had a chance to do much, lately. I majorly procrastinated on studying for a test that I had to take for a certification for the day job, so when it got to about a month until I had to take the test, I had to seriously buckle down to finish my studying. I never want to do that again! I was stressed that whole month, and even during the test, I thought for sure I was going to fail. Luckily, I didn't! I passed, so I am good for another 3 years. 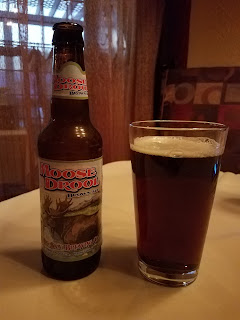 Once I had that test done, my anniversary was a few days later (8 years!). The husband and I went out for a nice dinner. I was perusing the drink menu, and I wasn't really enthused with anything there, but I noticed on the beer menu that there was a beer that was on my 99 bottles project. I, of course, ordered it!

This one is called Moose Drool Brown Ale. I really liked this one. The flavor on this liked to linger. After my first taste, the flavor didn't go away for a little bit. I liked this, though! The flavor probably wasn't the best pairing with what I ordered for dinner, but I still enjoyed both the food and the beer. My husband remarked that there was a bitter flavor to it, much like coffee. (He doesn't like coffee, so he didn't really care much for this beer, either).

I would order this beer again, however next time I think I would want to have beef with it, rather than delicate chicken. Or, this would be good by itself, for sure! This is a beer that likes to linger, so it is a good one to linger with!

Here is the stitching of my beer (I love that you can actually make out the moose in the picture!): 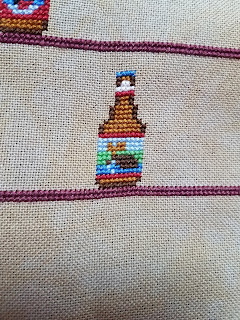 Here is the rest of the project so far: 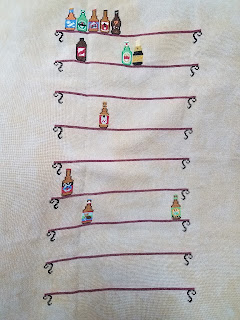 I have also had a chance to work on some chainmail, and I have even more bookmarks planned. Some of my charms have come in! Here is a sneak peek on the subject matter: 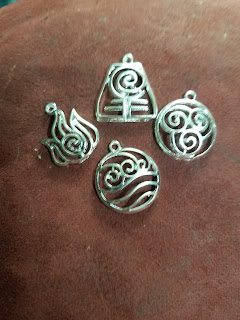 Email ThisBlogThis!Share to TwitterShare to FacebookShare to Pinterest
Labels: 99 Bottles

I want to do another giveaway!

It has been a while since my last giveaway, and I want to do another one.

I have a bunch of stitchy things that I have collected for just this purpose, and I haven't done anything with them! I did neglect my blog for a little while, which didn't help, but I am back now! I may even have more than one winner!

Lots of plastic bobbins (you can never have too many)
Thread organizer boards
Travel scissors
Handmade (by me) chainmail charm/scissor fob
Needles
Needle minder
a few other small stitchy things
Some random charts (if you let me know what kinds of things you like)
... and more!

This is definitely not a complete list, there are so many things I have to include. I want a lot of it to be a surprise!

Due to how international shipping is going right now, I want to limit this to the US, if possible. Things are getting held up in customs super extra long, and I would hate for things to get lost.

Here's what to do:

3. (optional) Promote my giveaway on your blog or website

Another IHSW this past weekend!

There was another IHSW this past weekend, so I decided to get some stitching in. I really need to get back in the habit so I can start the monthly challenge I set again in September! Since I failed in August, I really haven't been in the mood to stitch, so I just haven't.

I got stitching again over the weekend, and I completed about 10-12 colors on my page. It may seem like a lot, but considering some of these colors only had a few spread out stitches across the whole page, it really didn't add up to much. Most of the progress seen is from about 2-3 colors.

Here is where I was last update: 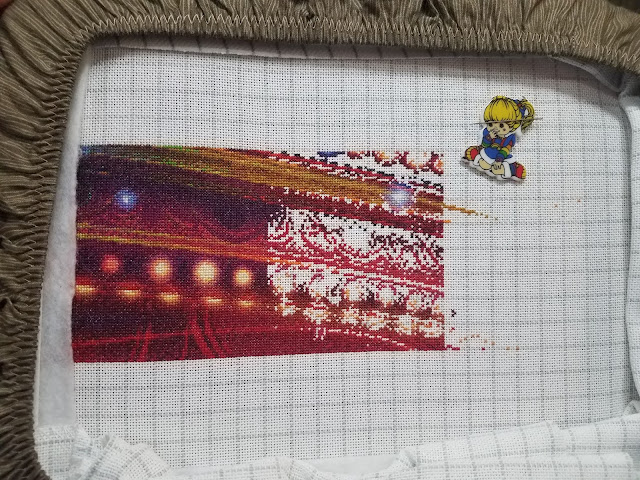 And here is where I am now: 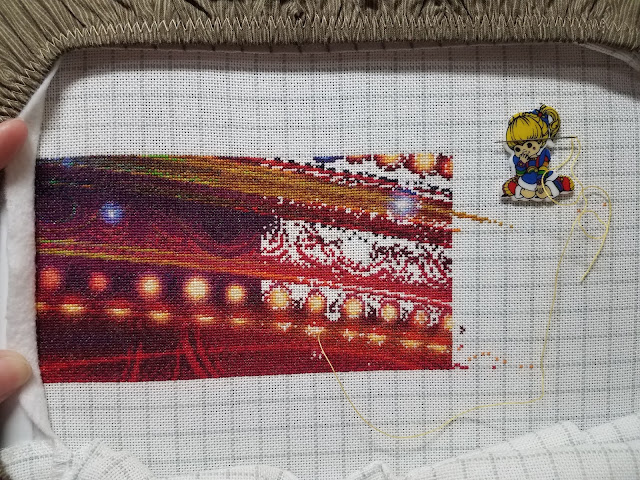 You can see most of the progress visible in the circles across the bottom half and the half-circles at the top.

I'm getting motivated to start stitching again, trying to finish this page! I wanted to have this page done a long time ago, I just wish there was more time to work on it! Work just gets in the way!

Along the River During the Qingming Festival

Sasha
I'm not the fastest stitcher around, so my progress shots do not show huge amounts of progress, but I am happy with any amount of progress.